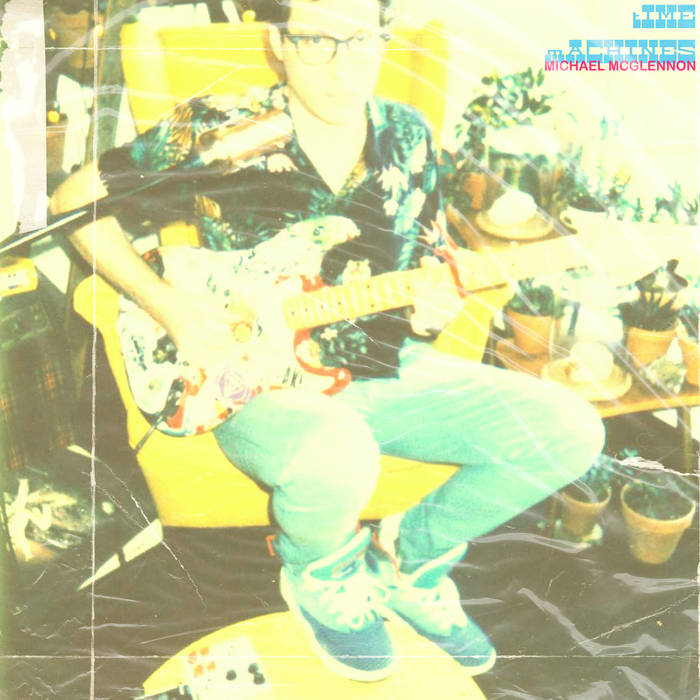 'tIME mACHINES' is a morbid psychedelic folk album that takes us on a journey through our nostalgic hunger for the past, tunneling backwards to the wellspring of a creative impulse. This album originates in an idling grief that cut McGlennon off from his community of songwriters, following the death of a band member in his post-punk group Bravery Cat. The creative engine running, now with nowhere to go, songs kept being written down and forgotten. Cassette tapes and notebooks were buried in boxes. With the death of his idol, Daniel Johnston, McGlennon was called back to the ambition of making music as honest and fearless as possible. The dozens of songs that had only lived briefly in cassettes and notebooks were exhumed over the following months for consideration. Some of the raw Panasonic Slimline recordings were included as an aesthetic tribute to Johnston, other songs were selected to be recorded in studio with fully realized instrumentation. Each song, whether it’s the darkly hilarious story of an ingenious scheme on flat-earthers to build a rocket ship and prove them wrong, or an exquisitely wrought story of loving someone enough that you become immortal as long as you are with them, feels like a cut into McGlennon's subconscious fresh and joyously raw. This is the music that writes itself at 4AM when the last long thread of your mind comes loose and your heart starts to scream. It is at turns sentimental, darkly hilarious, exquisitely crafted and low fi as a drunken message on your answering machine. Listen and remember the dreams you wrote down so long ago and put in a box in your crawl space. Listen to this album and empty the box, travel through the stained cardboard portal that is 'tIME mACHINES'

A blurry and dense trip companion of clouded hum alongs grinning with a comforting glow. Well planned tracks of sincere and wonderfully confusing confessionals communicated with reverberous dark colors through veils of organ and guitar. Sweet and benevolent gestures of sounds abound. A must - Steven Cerio

Love this collection of beautiful raw recordings from Michael McGlennon. What a great homage to Johnston's spirit. These tunes are peaceful, experimental and heartfelt - Friendly Rich

Bandcamp Daily  your guide to the world of Bandcamp